The last year I decided to take the adventure for traveling around my country. It was not easy beacause I just have a few days in the year to travel. This year,  I decided to do something different, make some impact.  I decided to travel to Guajira and  contribute with the education of children.

The Guajira is an amazing destinations beacuse you can visit places such as Cabo de la vela and Punta Gallinas.

The adventure started with Magic Tour, at 6:20 a.m. I was introduced to Palomino after having been in the Sierra Nevada, we had a good breakfast of broth with rib and we are ready for our adventure through the desert of La Guajira . This route to the north of Colombia was totally unknown for all time, the road from the dove to the Riohacha at the right time to talk with those who accompanied me.

Once we arrived in Riohacha, we followed the road on the Caribbean road and turned off towards Manaure, 116 km of paved road. While we arrived, we could see the famous and paradisiacal beaches of Mayapo in the distance, and paradisiacal because we were fascinated by the turquoise color of the sea that mixed with the deep blue of the sky, what a wonder.

Later we will arrive at the most important sea salt mines in the country. From the beginning to this place you can start to see the ponds. It’s about the big companies and the companies. In this town there are five communities that live the trade of exploitation of this material.

As soon as we arrived, children and adults started this product, salt. And according to what they said it was for all kinds of ailments, even for the famous pecueca … there I could laugh, and the girl who offered it to me was very convincing, because she was such a short-toed.

While I was photographing the place, there was a very special moment because the children had fun playing with a salt nose, it was the best thing that happened, and at the same time I was talking and getting to know my companions a little more than 3 days away. Some came from France, Holland USA and were already visiting our country from a few months ago and were fascinated with our cultural, traditional and especially the landscape. I was the only Colombian talkative (so they say to those who talk a lot and do not stop), and I was delighted to ask about a new place for me. But Juan Carlos says the driver who took us.

Taking advantage of that moment, I chatted with the locals, and I met Yanitza who told me that his whole life had lived there and to do this job they had to get up very early to collect the lumps of salt and take them to Riohacha before noon for them to I caught the sun It did not fit in my head that for every ton of salt on site it sold for $ 20,000 COP, approximately 6.7USD, very little for the work they have to do.

We continue our journey we met a small part of the town of Manaure (because it is not only the place of the ponds) and then bird a village north of Manaure and where there is also the option of ecotourism. Continuing this way along a path where it is recommended not to stop pr private places and for the Wayuu we are Arijunas (strangers, strangers to your community), a journey of approximately 40 minutes to reach the famous 4-way point, is the point of Departure to Uribía, Maicao, Riohacha and cabo de la vela. There we could fit a 4×4 vehicle, because the terrain we had to follow was more demanding.

At this point they gave us a surprise, to see the cerrejón train pass with its 1.5 km long that was on the way to Puerto Bolivar. For those who did not know, El Cerrejón is the largest coal mine in the world.

Once in the new vehicles we started our way out of the sail, it was very interesting to see how the vegetation changed, a desert landscape began, and the weather became stronger, since since November 2018 it does not rain in the Guajira. Second stop: Ahuyama desert, it was very cool to see how the arid soil was formed and little rocky by the existence of sea in this area, and when suddenly some children came out of nowhere to greet and ask for candies (I’ll tell you in the Punta Gallinas blog because it’s good to bring cookies).

Continuing our trip, we arrived at the town of Cabo de la Vela, Pueblo where Ranchería used to be, then Wayuu cemetery and later it became a fishing village. For those who did not know there lived the grandmother of Vallenato singer Diomedes Díaz. And that now is a town that lives on tourism, crafts and fishing.

It is said that Cabo de la Vela, outside of being a magical place, is the “Starting point of the deceased to the unknown”, according to the Wayuu tradition.

I took these trips to learn a bit of culture, and we did it, we had Wayunaiki class (official Wayuu language), the idea was basic words, because I think it is very important to at least learn something when you are in a different place to the language that you handle, and to let the locals know is to tell them that their culture is very important. Jesus our driver was our instructor, and if we manage to retain some, like Anayawats, means thank you

We also learned something about their culture, like each family has a Palabrero, who is the leader, who makes the most important decisions; how much must the man pay when he wants to marry a Wayuu woman, how many goats he should give, how many bottles of whiskey and what else he considers. How different, not? 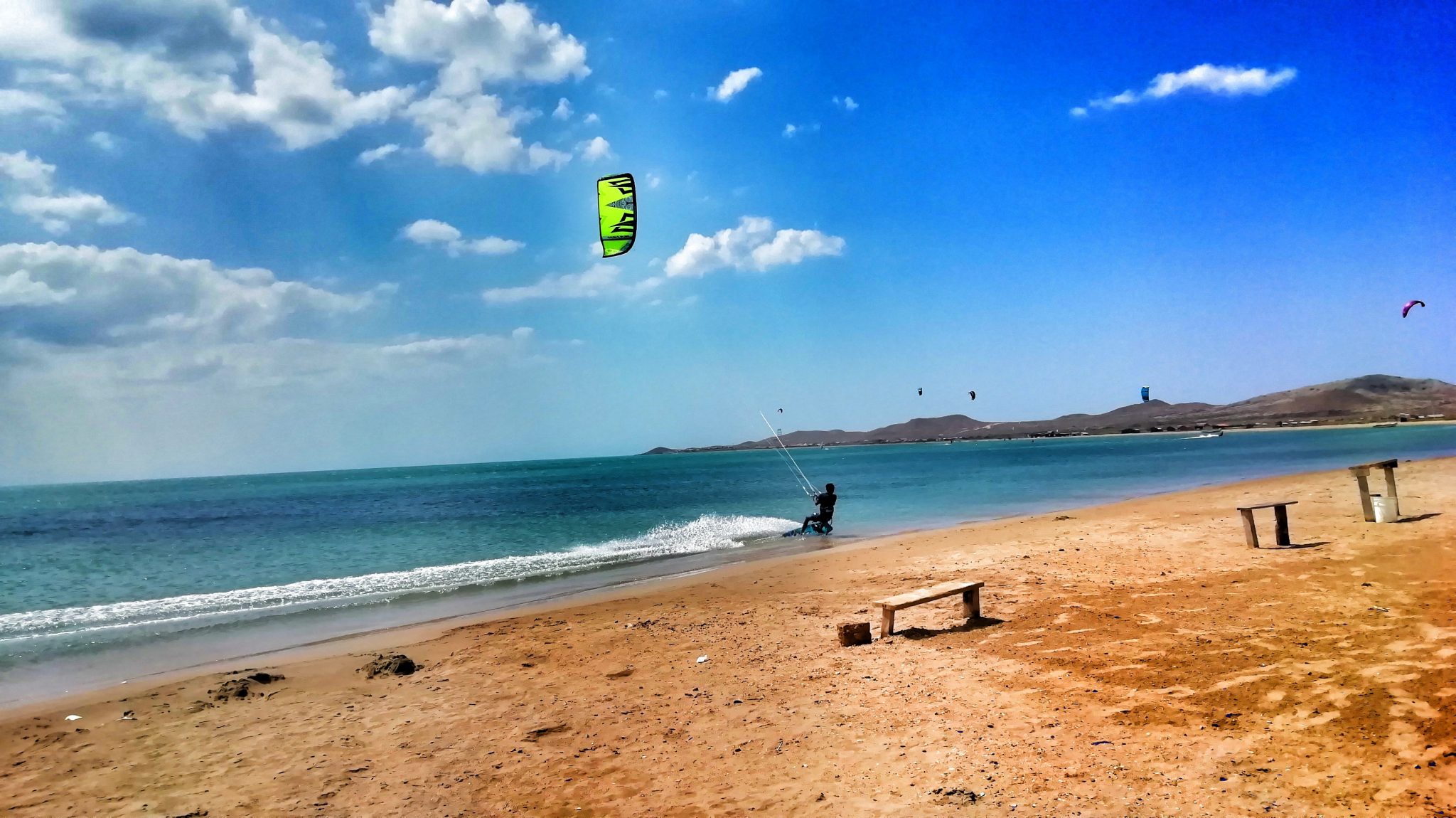 When we arrived at the town, we had the pleasure of eating Cojinoa, a typical Colombian Pacific fish, with its rice with coconut and patacon, perfect for the time that was already 1:30 pm, and hunger was already attacking us. We unloaded suitcases in the Hospedaje Mónaco, and we were able to stay in Chinchorros, hammocks in Wayuu. Did you know that sleeping is not done longitudinally but diagonally so that the column is not curved ?.

The hammocks, unlike hammocks, are woven in thread and have a kind of skirt that serves as a “blanket” to keep warm in the desert nights.

As we still had time, we went to the Pilon sugar only 30 minutes, and his name is the way it is, again we stumbled upon the magical colors, and adding the gold of its sand on the beach.

To climb the Pilón, it is necessary to make it soft because the wind is very strong and not to get tired to the summit, besides it would not be nice to slip on its path of gravel and stones. Being at its peak, you can feel the strong wind that is able to make you fall, but it did not matter because the landscape deserved that you stay a good while to contemplate.

When we got off the pylon, we went to spend an afternoon on the beach, and we went to its famous beaches, with golden sand and fresh sea. If you dare, you can buy Wayuu backpacks, many designs and colors.

About 4:30 pm we went to see the sunset, in another puno of the upper Guajira, we went to the Eye of water, a place where they said that in this stone sweet water was born. It is a small mountain from where you can see the Caribbean Sea. Usually, whenever we go to a place we always look to the front, but rarely backwards, and this time, we were surprised by the landscape that this region gave us, an arid and somewhat mountainous terrain, a desert limited by the sea , and that makes change the perspective of the place we visit.

After the afternoon we stayed on the hill of the turtle to see the sunset, Our guide advised us to stay there, and it was the best decision pes we had only 4 people admiring this wonder of nature and it was the calmest moment and connection that I could feel during the whole journey.

After about 6 we returned to the hostel Mónaco to take a shower, dinner, a couple of beers, we took the opportunity to dance and share a little more because the next day we would have to leave very early in Punta Gallinas … I will tell you in the next Blog.

If you are interested in the sailing out tour, you can get it here: https://magictourcolombia.com/tours/cabo-de-la-vela-2-days/

About the author: Gisela Ramírez, Colombian, Architect, blogger traveler, and responsible for discovering my country a little more, in love with the world.

marketing
Previous post5 reason why Tayrona Park has been closed
Next postTips to go to Bahía Concha Tayrona Park, everything you need to know